You wake up one day and turn on Fox News. You hear the captain of the high school cheerleading team was raped by a college student at a party the previous night. The first thing which comes to your mind is: what was she wearing?

Ah, there it is. She was wearing a miniskirt and was drunk too. Imagine! What else did she expect, going out looking like that? What else is a man to do, if a girl parades her body around so? She should have covered herself, if she didn’t want to be raped.

After all, a man can only stand so much temptation before he succumbs to his sexual fantasies. It was the girl’s responsibility to ensure her safety. Look at her crying about being raped now! You should have thought of that before you wore that miniskirt, Miss Crybaby!

Thus assured, you turn back to your coffee and forget about the case completely.

Meet Ayesha Zulfiqar, a 10th grader, who was kidnapped, raped, strangled to death and thrown in a field to rot away.

Was she wearing a miniskirt? Was she drunk?

Ayesha was wearing an abaya, a garment that covers the whole body, arms and head, when she was kidnapped and raped. Signs of torture were found on her corpse.

Was she asking for it?

Perhaps she shouldn’t ever have stepped out of her house. Yes, she was fully covered, but how could the rapist have known she didn’t want to be raped? She should have walked around with a sign saying, “PLEASE DON’T RAPE ME.” It would have been clearer then.

Meet Zainab Ansari, a 6-year-old, who went out to study but was instead kidnapped, raped and murdered.

Her body was found in a rubbish heap, five days after her death.

Maybe she should have worn an abaya, that might have helped. But, no, Ayesha was raped and killed even though she was fully covered.

What else then? What must a 6-year-old do to avoid rape?

Meet Farhan Ali, a kid in 4th grade, who was raped and murdered by his own teacher. 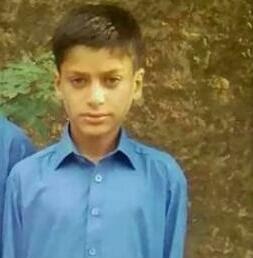 Where did Farhan go wrong? Should he have worn an abaya too?

But, wait, doesn’t rape happen because the victim wears revealing clothes and seduces the rapist? How then did Farhan, a male, attract the attention of the rapist?

Maybe Farhan asked to be raped, maybe he begged for it. After all, what other reason can there be for rape?

There seems to be a single common denominator in all of these cases: a rapist.

It’s almost like rape and sexual abuse happens, not because of the clothes of the victim, but the disgusting and sick mentality of the rapist.

All of the examples I cited are coincidentally from South Asia but rape and sexual abuse is prevalent across the globe. Here are the statistics for sexual abuse in the US:

One in five women and one in 71 men will be raped at some point in their lives.

Almost half (49.5%) of multiracial women and over 45% of American Indian/Alaska Native women were sexually abused in their lifetime.

91% of victims of rape and sexual assault are female, and nine percent are male.

Only 12% of child sexual abuse is ever reported to the authorities.

27% of college women have experienced some form of unwanted sexual contact.

Rape is the most under-reported crime; 63% of sexual assaults are not reported to police.

Perhaps, just perhaps, rather than schooling girls on how to defend themselves against rape, maybe we should teach men and women both to view people as living, breathing humans and not mere sex objects.

The next time you hear the words rape or sexual assault, know the clothes or mental state of the victim played absolutely no part in it. Women (and men) get raped all over the world, regardless of their age, dressing style or ethnicity.

Countless cases of rape and sexual assault remain unreported because the victims are bullied into silence. Even if they do come out against their abusers, they are blamed and asked the inevitable question:

What were you wearing?

As if women wearing abayas don’t get raped.

As if little kids don’t get raped.

As if men don’t get raped. 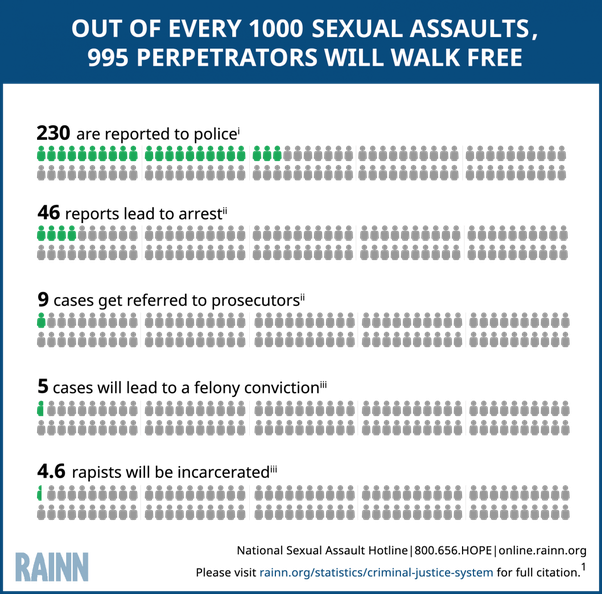 So many rapists are aquitted because there are loopholes in the legal system; factors such as clothes, alcohol intake or educational credibility. Rapists are empathized with if they perform well academically or are athletic. Apparently, being on the swimming team means you can rape as many people as you like and get away with it. You’re a college student after all; your future should not be sacrificed, even if the victim suffers all her life.

There aren’t just rapists, there are rape apologists too. Every time you denounce a rape victim simply for the clothes he/she was wearing, or any other physical factor, you do a great disservice to your friends, your colleagues, your children and grandchildren.

Maybe, one day, you’ll have to comfort your 7-year-old daughter who was groped by her uncle. Will you then, while she’s crying in your arms, ask her what she was wearing or if any aspect of her behaviour indicated she wanted to be sexually assaulted?

If you won’t, please extend the same sympathy to others. Sexual assault survivors carry around the scars of their past forever. They don’t need you telling them they had it coming. If you can’t empathise, please don’t comment at all.

When the grief is tangible, all vocabulary fails. The world may have made many technological advancements, but there are yet no means to take away the pain and heartbreak from someone who has been sexually assaulted. The years pass, but the trauma lives on.

Rape is never the victim’s fault.

Repeat after me. Learn it. Tattoo it. Chant it every day, morning and evening. Teach it to your kids and grandkids.

Maybe, just maybe, rapists will one day be held accountable for their actions while victims will be given the sympathy and compassion they deserve.

EDIT: For everyone asking, I’ve already edited the answer and removed the pictures I deemed inappropriate. I let two pictures remain because they are happy, smiling ones and were released by the concerned parents themselves.

That is how I believe these angels should be remembered; as happy little kids with dreams in their eyes and the whole world at their fingertips. May they rest in power, forever.

RT @youthsnews: When I was in high school I stole my referrals before I had to serve the punishment. https://t.co/OtPLf3Fjq7: When I was in…
1 hour ago