There’s been a dramatic rise in children diagnosed with autism in the past decade.

The divorce rate across the American population is similarly rising.

There must be something wrong? Right?

During World War II, the Allies tracked bullet holes on planes that were hit by Nazi fire. 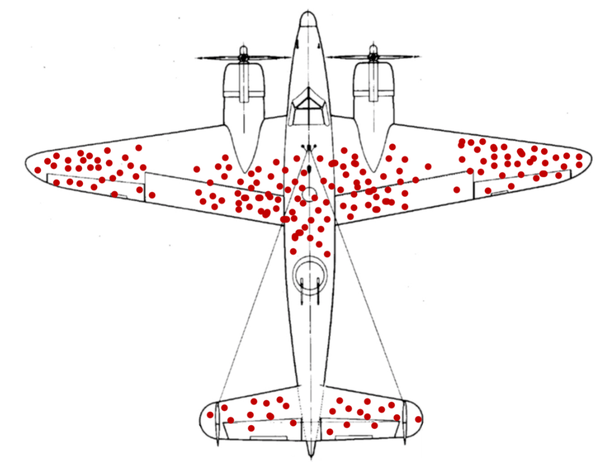 They were looking to strengthen the planes, reinforce heavily hit areas so they could withstand even more.

Their immediate thought was to build up the places with clusters of red dots and on the surface, it was a logical deduction. After all, these were the areas getting hit the most.

But Abraham Wald, a mathematician came to a different conclusion: the red dots only represented the damage on planes that came home.

Instead, they should reinforce the places where there were no dots, because those are the places the plane wouldn’t survive being hit.

This phenomenon is called survivorship bias. At its simplest, it’s when we look at the things that survived when we should be focusing on the ones that didn’t.

Maybe there was never an increase in children with autism, instead the higher prevalence stems from increased awareness or decreased stigma. Or as with mental illness it is just actually diagnosed today, whereas years ago the child was just ‘disturbed’ or anti-social.

Maybe the divorce rate is high because people are better able to leave toxic and abusive relationships.

Maybe there are more people with mental illnesses because we’re actually diagnosing them.

Apple accidentally leaks AirTags, its Tile-like item tracker: Apple‘s popularity means its products are some of the… https://t.co/XKwHI49odw
2 hours ago

This adorable tiny record maker lets you cut your own 5-inch vinyl singles: Vinyl has been coming back for the last… https://t.co/3utqHcItqz
15 hours ago